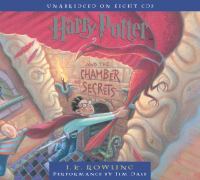 Harry Potter and the Chamber of Secrets

When the Chamber of secrets is opened again at the Hogwarts School for Witchcraft and Wizardry, second-year student Harry Potter finds himself in danger from a dark power that has once more been released on the school.
Publisher: New York :, Listening Library,, [1999]
Copyright Date: ℗1999
ISBN: 9780807286012
$60.00
080728601X

If you enjoy adventurous stories and fantasy I believe Harry Potter and the Chamber of Secrets is the perfect book for you. Following Harry's previous year at Hogwarts he and his friends decide to attempt to solve the crisis occurring at Hogwarts as they learn more in depth about magic and their personal abilities. Just like all of the other books in this series the vivid language, foreshadowing, and dialogue allows the reader to form a connection and stronger understanding of the plot and characters. I recommend this book and believe it is an story that will keep you entertained and engaged.
-Nicolas, Grade 10

The Chamber of Secrets is the second instalment in the Harry Potter series. Harry Potter is about to start his second year at Hogwarts school of Witchcraft and Wizardry. He expects it to be a normal year, but then a secret chamber opens, muggle-born students are attacked and Harry must put his life in danger once more. I enjoyed this book because it is packed with action, fantasy and creativity. My favourite part is when Harry goes back in time to witness the expulsion of his friend Hagrid when he was a young boy at Hogwarts. I would recommend this to anyone ages 9+ who loves fantasy stories. It is easy to read and the author, J. K. Rowling, did a great job of making the reader feel like they are right there with Harry experiencing all of his his adventures. It is definitely worth 5 stars. @GymGirl of the Teen Review Board at the Hamilton Public Library

Sometimes myths and legends are found to be true, whether they are interesting and intriguing, or dangerous and should not be uncovered. In the second book in the series, Harry potter returns for his second year of education - if he can even make it to school. Unfortunately, that is only the start of his action-packed adventure. With the realization of an unnaturally rare ability, to the uncovering of the horrors of a myth that has remained since the start of this ancient school, Harry must remain with his friends in order to overcome the dangers that await him.
@bookreviewer888 of the Hamilton Public Library Teen Review Board

Potter & the Chamber of Secrets in my opinion is fairly interesting. My favourite part is when Harry is actually in the chamber going up against Tom Riddle (Voldemort) and the basilisk! I won’t get into much detail about it but throughout the story Harry, Ron, and Hermione are trying to figure out who or what opened the “chamber of secrets”. For the most part they assume it was Draco because only the Heir of Slytherin can open it. The only problem with that is you need to be able to speak parseltongue in order to officially open it. Anyway, you can find this book series pretty much anywhere (book, overdrive, ebook, etc). I feel like this book was trying to tell people not to jump to conclusions. They thought it was Draco for the longest time that when they found out, they wasted all that time on blaming him while many blamed Harry because he could speak parseltongue. I would rate Harry Potter & the Chamber of Secrets a 3.5/5 stars because while some parts are suspenseful, I thought it dragged on for a long time at unnecessary parts.
@TheBookNerd1 of the Hamilton Public Library Teen Review Board

This sequel is just as great as the first! I loved how Rowling was able to sneak in little details throughout the book, then bring them all together for an epic ending! There are a lot of revelations in this book for Harry, and meaningful moments between the characters. The storyline is completely different from the first book, but just as amazing, and I would definitely recommend this novel to anyone looking for a good book! As Harry begins his second year at Hogwarts, new characters (first years) are introduced, such as Luna Lovegood, Colin Creevey, and more focus on Ginny Weasley. They are all so likeable and unique, which just adds to the overall enjoyment of the story.
@PenelopeScriptor of the Teen Review Board of the Hamilton Public Library.

When I read this, I was a slow reader, but I sped straight through this book, and couldn’t stop reading it. I couldn’t get enough of this, and continued onto the next book in the series. This book was better than the first book, and the first book already being so good, this book was amazing. There’s a good reason why this series is so famous. This book is shorter than some other books from this series. I hoped that it would be longer since this book was excellent. This book is great for young teens and adults as well.

This is a great great great book! I'm rereading the series again and after I read the book I watch the movie, but for The Chamber of Secrets I accidentally watched the movie first and then read the book. I do like the books better than the movies though.

I loved the suspense of : What was in the Chamber of Secrets and why was it there?!

Wonderful illustrations, a must read for ages 9 and above.

sophiaSHkim thinks this title is suitable for 9 years and over

vaasu thinks this title is suitable for 10 years and over

OPL_KrisC thinks this title is suitable for 9 years and over

crhinehart thinks this title is suitable for 8 years and over

green_cat_2121 thinks this title is suitable for 10 years and over

navy_nightingale_207 thinks this title is suitable for 10 years and over

ravenclawblue thinks this title is suitable for 9 years and over

"It is our choices, Harry, that show what we truly are, far more than our abilities.”

Hermione: "Harry--I think I've just understood something! I've got to go to the library!"

And she sprinted away, up the stairs.

Harry: "What does she understand?"
Ron: "Loads more than I do."
Harry: "But why's she got to go to the library?"
Ron (shrugs): "Because that's what Hermione does. When in doubt, go to the library."

It is our choices, Harry, that show what we truly are, far more than our abilities.

“That would be a cheerful visit. ‘Hello, Hagrid! Tell us, have you been setting anything mad and hairy loose in the castle lately?'” -Ron Weasley

“Why spiders? Why couldn’t it be ‘follow the butterflies’?” -Ron Weasley

his eyes are as green as a fresh pickled toad
his hair is as dark as a blackboard
i wish he was mine
he's really divine
the boy who conquered the dark lord!
-Ginny's valentine/ Fred and George

"This is what Dumbledore sends his defender? A songbird and an old hat?"

"Honestly if you were going any slower, you would be going backwards"

A mysterious elf tells Harry to expect trouble during his second year at Hogwarts, but nothing can prepare him for trees that fight back, flying cars, spiders that talk and deadly warnings written in blood on the walls of the school.

Harry Potter and the Chamber of Secrets, is a mythical magical book made by J.K Rowling. It is about a boy named Harry Potter as we journey with him on his second adventure in Hogwarts. They come upon problems including the " Heir of Slytherin" and most importantly "The Chamber of Secrets". The wonderful book includes characters like Ginny Weasley, Harry Potter, Ron Weasley, Hermoine Granger, Tom Riddle, Dumbledore, Snape, Lord Voldemort, Hagrid and many other intriguing characters.
Hope you like the book it's wonderful!

Harry Potter's summer has included the WORST birthday ever, DOOMY warnings from a house-elf called Dobby, and a RESCUE from the Dursley's by his friend, Ron Weasley n a magical FLYING car! Back at Hogwarts School for his second year, Harry hears strange WHISPERS echo through empyt corridoes- and then the ATTACK start. Students are found though turned into stone ...
Dobby's SINISTER predictions seem to be coming TRUE

When Harry Potter [age 12] was still at his aunt's and uncle's house, a house elf named Dobby tries to stop him from going to Hogwarts. He gets in big trouble but luckily his friend Ron and the twins rescue him. At Hogwarts ron receives a howler and Harry gets knocked out in his first Quidditch game of the season. Sone they learn about the Chamber of Secrets, its' opener, and how to get in. Will they survive???

This book starts again in the summer while Harry is at the Dursley's. While they are hosting a dinner party Harry is told to stay in his room and not make any noise, at this time a house elf named Dobby shows up in Harry's room warning him not to go back to Hogwarts. Dobby ends up sending a pudding on one of the guest's head, causing harry to be locked in his room. Thankfully Ron, Fred and George rescue him with their flying car. Soon after the school year begins the Chamber of Secrets gets open and something is attacking the mud bloods.

After a curious encounter with a house elf named Dobby, and being nearly expelled for flying Mr. Weasley's car to Hogwarts, Harry thinks he'll have a quiet break from everything at last. Soon, trouble starts again, thereby dashing all hopes for a normal-or as normal as Hogwarts could get-school year. People aren't sure who the culprit is; all they know is that he or she is a direct heir of Salazar Slytherin, pureblood loving founder of Hogwarts. Could it possibly be Draco Malfoy, a muggle-born hating enemy of Harry's? Maybe it's Hagrid, whose mysterious past is finally revealed? Harry, determined to find the culprit, is dismayed when he realizes who everyone really suspects....himself!

harry returns to hogwarts for his 2nd year. someone opened the chamber of secrets so there is a snake on the loose

This a another great book by J. K. Rowling. The story continues a Harry Potter and his two best friends Ron Weasley and Hermione Granger go on an adventure to save the school from the horrors within the Chamber of Secrets.

In Harry Potter's second year of Hogwarts there is once more a mystery around the school. Harry hears voices that no one else can hear and students are being attacked! Can Harry, Ron, and Hermione save the day? Read the book to find out!

when the chamber of secrets has been opened there are so many attacks on muggle borns- including hermione granger. harry potter finds himself hot on the trail with his best friend ron weasley to find out who is the heir of slytherin.

Frightening or Intense Scenes: It is a little bit more intense than the first book so if you are younger you might want to wait a bit before reading it.