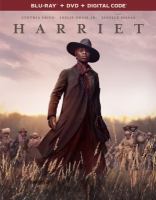 As memorable are the title cards on screen:

===
Harriet Tubman was the most famous conductor on the Underground Railroad, leading over 70 slaves to freedom.

During the Civil War, Harriet became a spy for the Union Army.

She led 150 black soldiers in the Combahee River Raid, freeing over 750 slaves.

Harriet remains one of the few women in U.S. history to lead an armed expedition.

She later remarried and dedicated her life to helping freed slaves, the elderly and Women's Suffrage.

She died surrounded by loved ones on March 10. 1913 of approximately 91 years of age.

Her last words were, "I go to prepare a place for you."